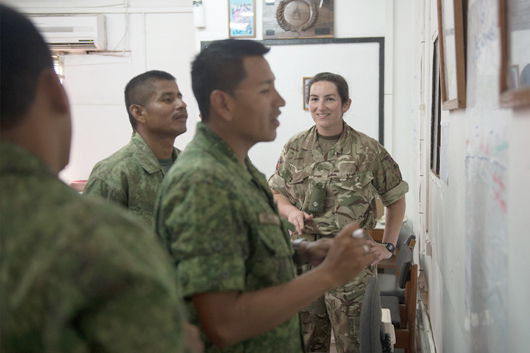 “The BDF have been really good to work with. It’s brilliant being here, I would not have been offered this opportunity in civvy street - this is exactly what anyone joins the Army for.”
2nd Lieutenant Samantha Daly

A former science teacher from Cirencester has been serving with the British Army in Central America in support of the Belize Defence Force (BDF).

2nd Lieutenant Samantha Daly an officer with the Army’s Educational and Training Services (ETS) is helping the BDF’s future leaders become great teachers in their own right.

Formerly a teacher at Sherborne Secondary School in Dorset, she has been in the Army less than a year and was only commissioned nine months ago. She is in Belize for a month working in energy-sapping humidity and temperatures of 30°C.

Samantha said: “I had a great teaching job, but I’d heard about Army education and it appealed. I love the idea of being able to educate soldiers. I think my teaching background has helped me, I already had great experience in how to teach, so I was able to focus on the subject matter which is very different to what I was used to. My friends back in teaching were a bit surprised at my move, but I’m sure they understand the pull of working in places like Belize.”

Based at the British Army Training Unit Support at Belize’s Price Barracks and nearby Hattieville Ranges, she’s part of the team responsible for helping to make sure the BDF’s future leaders have the skills they need to teach patrol, navigation and mapping techniques to others under their command.

Captain Danny Shal, from the Belizean training team, explained: “This is where it all starts for them; where we teach them things they need to know as soldiers. It is the start of a career path that could take any of them to the role of Sergeant Major.”

Lieutenant Josh Sanders, the officer in command of the British training team, said: “The standards we expect from the BDF candidates are exactly those we would expect if we were running this for our own soldiers in the UK. What we’ve been able to deliver here has exceeded our expectations because we and the BDF share the same basic Army principles.”

Samantha added: “The BDF have been really good to work with. It’s brilliant being here, I would not have been offered this opportunity in civvy street - this is exactly what anyone joins the Army for.”

Do you have a Cirencester related news story?

If you have a Cirencester related news story you would like to tell us about, please email [email protected]

Events in the Cotswolds